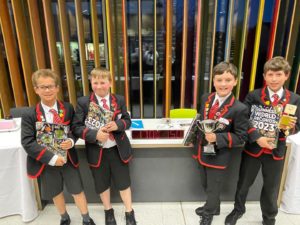 Congratulations to Theo, Miles, George and ‘Captain’ Milo for their amazing performance at Uppingham School’s annual ‘On the Buzzer’ general knowledge quiz tournament.

After successfully winning their group, by outscoring both St Hugh’s and Spratton Hall, the boys moved on to the quarter finals of the main tournament. The ‘University Challenge’ format continued into a knockout event, and after further victories against St. Hugh’s’ A team and Bilton Grange, Brooke made it through to the final for the first time.

As the action moved to the lecture hall and the audience swelled to over 100, the team performed magnificently. However, after 10 minutes of questioning the boys could not be separated from their Witham Hall opposition, with both teams tied on the same score. After a further two minutes of questions, the boys had done it, successfully answering the final three bonus questions to pull into an unassailable lead.

A huge well done to the boys from everyone at the school!